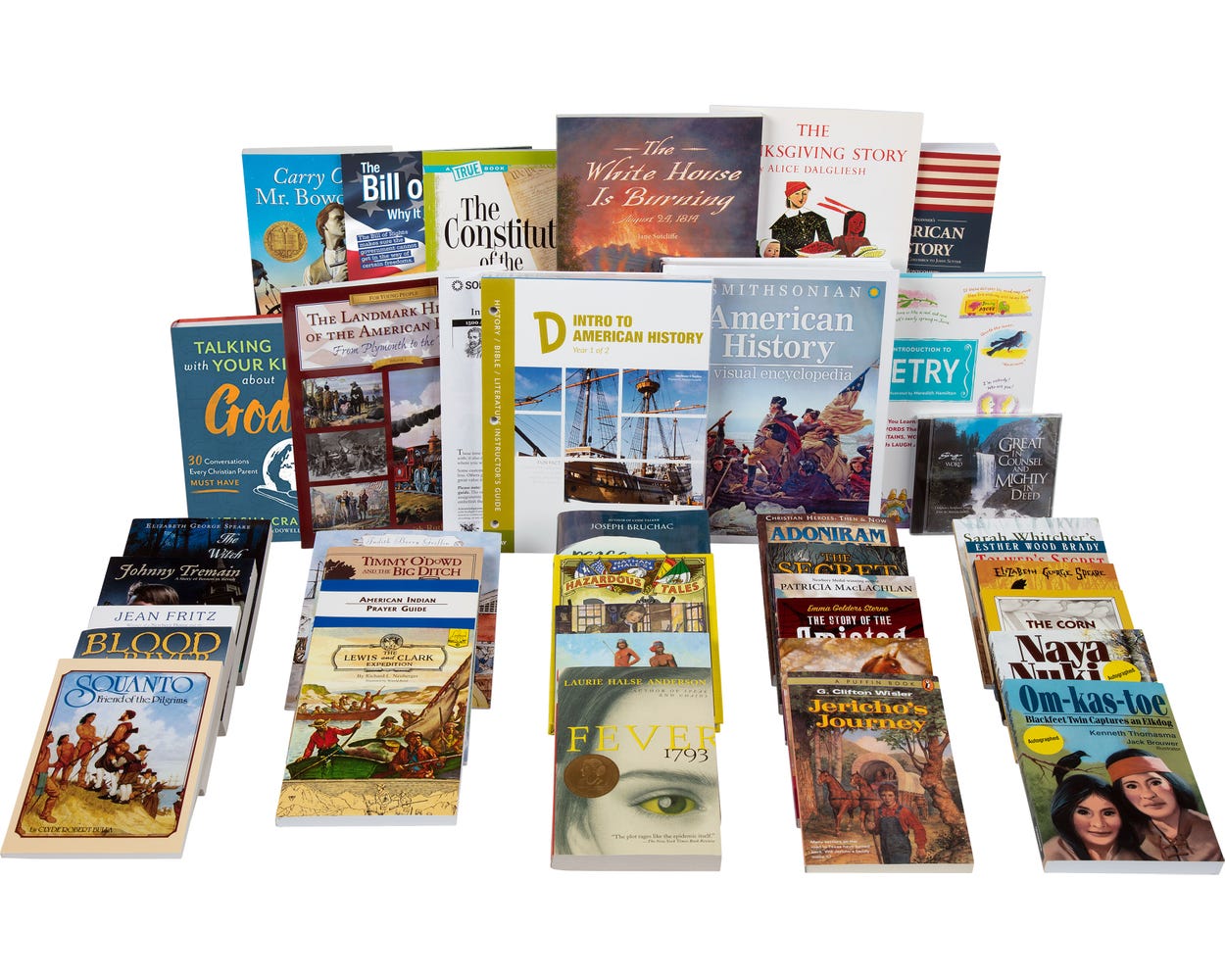 Intro to American History, Year 1 of 2

DISCOVER THE FOUNDATION OF THE UNITED STATES—AND THE CIVILIZATIONS THAT WERE ALREADY THERE.

Year one of a two-year study, this 36-week homeschool course covers American History from the world before Columbus to just before the Civil War. For the first time in the Sonlight progression, Sonlight History / Bible / Literature D links together History, Geography, Language Arts, Read-Alouds, and Readers. Your children will make astonishing connections between the people, places, and events in American History.

Discover the foundation of the United States – and the civilizations that were already there.

Year one of a two-year study, this course covers history from the world before Columbus to just before the Civil War. For the first time in the Sonlight progression, Sonlight D links together History, Geography, Language Arts, Read-Alouds, and Readers. Your children will make astonishing connections between the people, places, and events in American History.

The central history book in this program tells fascinating stories about the social forces and cultural influences that have made Americans unique. Biographies, historical fiction, and absorbing readers add depth to your study. you'll meet famous Americans like Pocahontas and Benjamin Franklin, and ordinary Americans who did extraordinary things for God, like Ann and Adoniram Judson.

Estimated daily time for Intro to American History, Year 1 of 2 including your other subjects: Student: 3.5-4.5 hrs | Parent: 2-3 hrs

The overarching goal for this program, and its companion, Sonlight E, is for children to understand the context and progression of American History. We want them to grasp why people came to a new land, how they persevered and settled the continent, and that every day they faced decisions about how to live in the New World.

We begin with history before the Pilgrims and end in the mid-1800s. The foundation of the History program is former Librarian of Congress Daniel Boorstin's Landmark History of the American People. Boorstin specializes in the details: why Georgia struggled as a "charity colony" (and what does that even mean?); why the sea tied some colonies to England, yet opened others to the world; and why early settlers had to innovate. These are fascinating stories! This full-color text includes timelines, maps, and illustrations.

To supplement the stories of Boorstin, the schedule interweaves the Smithsonian's American History: A Visual Encyclopedia, a book with short articles and copious illustrations.

The D Read-Alouds are awesome! Of the dozen, many of them are Newbery Medalists and Honors: The Witch of Blackbird Pond, a story of cultural differences, set in Puritan New England (and there isn't actually a witch in this story, though suspicious townsfolk wonder about a Quaker woman); Carry On, Mr. Bowditch, about a brilliant mathematician who made navigation more safe (such a great story!); Justin Morgan Had a Horse, the captivating true story of the runt horse who had the heart and drive to do far more than anyone could have predicted (you don't have to be a horse person to like this one); Johnny Tremain, set in Boston during the Revolutionary War (a perennial favorite); and Sign of the Beaver, in which a young settler, in danger of demise in the Maine wilderness, receives help from an unexpected source.

Some new titles have joined the Level D line-up this year. The Story of the Amistad which tells the dramatic story of the epic 1839 voyage of the schooner Amistad; The White House is Burning which captures the burning of the White House by the British during the war of 1812 from the viewpoint of the people who were there; and winner of numerous awards Fever 1793 which tells the story of the 1793 yellow fever plague in Philadelphia through the eyes of a 14-year-old girl. These are a few of the new books to join our early American History study.

Sonlight customers routinely say that they would not have picked up these books of their own accord, but are incredibly grateful that they had the opportunity to read them.

The Level D Readers are a great collection! As your children move from "learning to read" to "reading to learn," they have interesting and exciting books to enjoy. From Squanto, to settler stories, to the Revolution, these early chapter books are engaging and include several additional Newbery titles.

Please choose an option in the drop-down under price to view What's Included Items.

Please choose an option in the drop-down under price to view Additional Items.