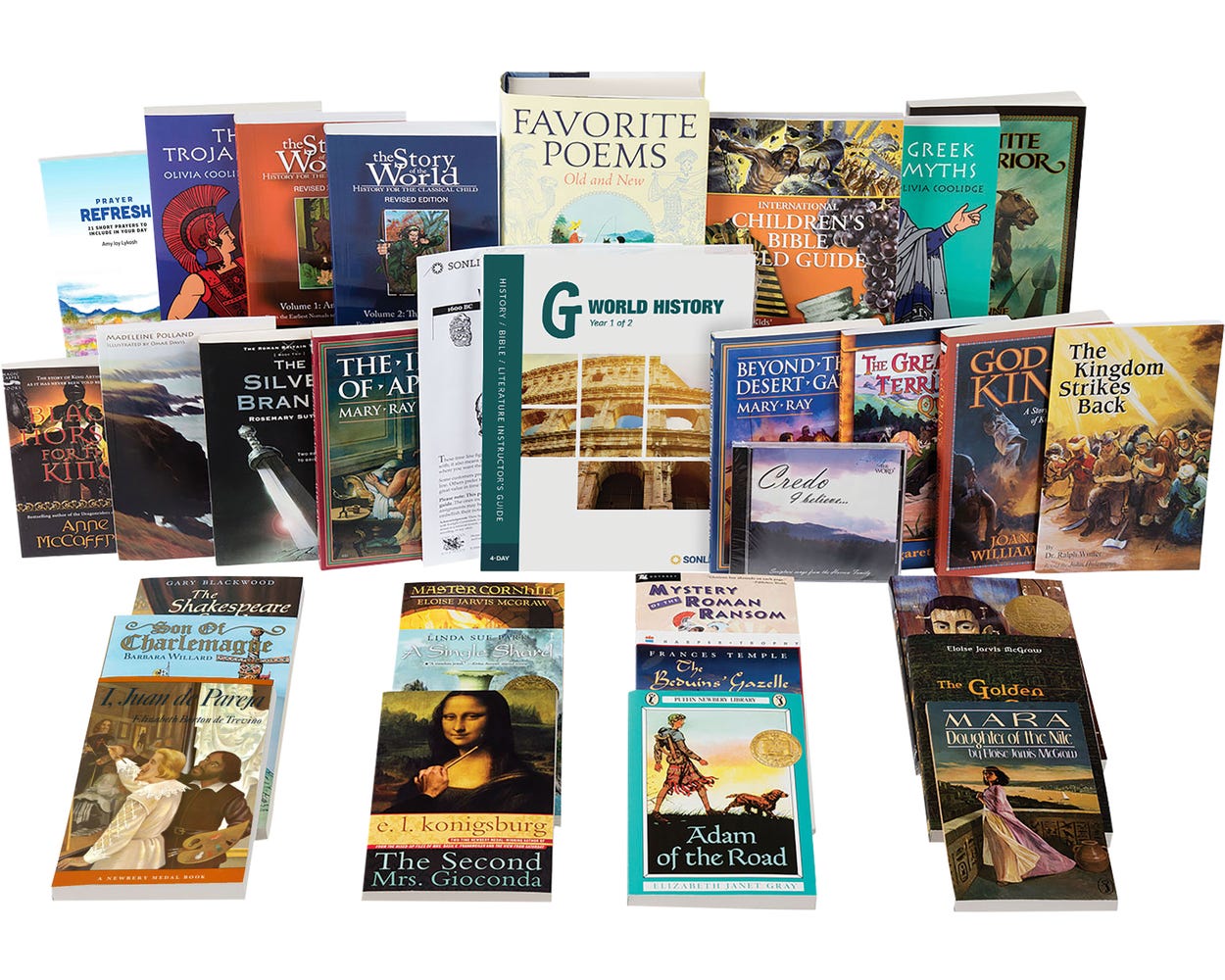 WITNESS THE RISE AND FALL OF ANCIENT EMPIRES

Sonlight G fosters your students' ability to think critically and make connections. Over the course of 36-weeks, your students will see the connected flow of human history, from creation through the transformative 1600s.

Witness the rise and fall of ancient empires.

You'll love watching your children grow this year. What a delight to see their joy in learning something new, to be amazed at their increasing capacity to offer input and consider abstract ideas, and to hear their intriguing observations.

Sonlight G fosters your students' ability to think critically and make connections. Over the course of 36-weeks, your students will see the connected flow of human history, from creation through the transformative 1600s.

History is a story – the story of real people, families, adventures, triumphs (and defeats), cultures. And a good story, well-told, should never be boring! The stories you'll read in Sonlight G bring long-ago times to life. This kind of study is very practical, offering examples and perspective as we experience history being created today. Your children will gain the big-picture understanding of the world that any well-educated adult in today's global society ought to have.

Sonlight G's cohesive, interconnected curriculum builds on three primary history texts, then adds compelling historical fiction, Greek myths, biographies, and other titles. Some of this you probably already know – the Nile and the Mona Lisa, King Arthur and the Roman occupation. The invitation to you now is to go deeper. Learn about travel on the Nile and usurping monarchs. Speculate about Leonardo da Vinci's motivation. Consider the technological advance that allowed the historic Arthur to reign. Picture the people under Roman rule.

Estimated daily time for World History, Year 1 of 2 including your other subjects: Student: 4-6 hrs | Parent: 2-3.5 hrs

In History, Sonlight G uses the first two books in Susan Wise Bauer's Story of the World series, covering Creation through the transformative 1600s. (Continue on with the other two in the series in Sonlight H.) Bauer is known for her storytelling, and these are extremely readable enjoyable books.

To go along with the descriptive text, the illustrated Usborne book World History from Ancient to Modern Times (5-Day) offers a visual history.

These resources work well together.

More than a dozen Read-Alouds (5-Day)/ eleven Read-Alouds (4-Day), plus an astonishing poetry collection with over 700 poems, progress mostly chronologically. The school year begins with the thrilling story of an Egyptian boy, Ranofer, set around 1350 B.C. From a goldsmith shop to the banks of the Nile, from a tomb to the palace, the setting is fascinating and varied.

The school year ends with Master Cornhill, set in London in 1666. In 1665, the Plague had wiped out much of the population. One year later, a great fire sweeps the city.

And in between these two dramatic stories, you'll read a marvelous summary of the Trojan War (important for cultural literacy – and a most excellent story); a beautiful story of adoption and pottery set in Korea about 900 years ago; one of the Holzmann family's favorite Sonlight books of all time, The Great and Terrible Quest; and the creative, insightful (and laugh-out-loud funny) story of Leonardo da Vinci's servant.

The Readers this year are also fabulous. (One of Sarita's daughters used most of them as Read-Alouds because she didn't want to miss the experience of sharing them with her boys.)

The first Reader, Mara, Daughter of the Nile, is the only book Sarita's daughter read two times in a row straight through, and then went back a third time to read again her favorite parts. A spy story, a rags-to-riches story, and a story of revolution – don't miss it.

The Bronze Bow, set in Galilee at the time of Christ, shows what it would have been like to live under Roman occupation. Would you have rebelled against harsh rule? What made the message of Jesus so compelling? This is a book that, you may find your whole family drawn in to the story.

There's a historical fiction book about how Lord Artos (better known in mythology as "King Arthur") brought horses to England. This was transformative. (Why? It was a technological breakthrough in warfare.) Another one tells the story of Patrick in Ireland. There's even one on the improbable subject of bull-fighting! It's a marvelous coming-of-age story about conquering fear and choosing your own path.

It's a great year of books to share with your children.

Please choose an option in the drop-down under price to view What's Included Items.

Please choose an option in the drop-down under price to view Additional Items.