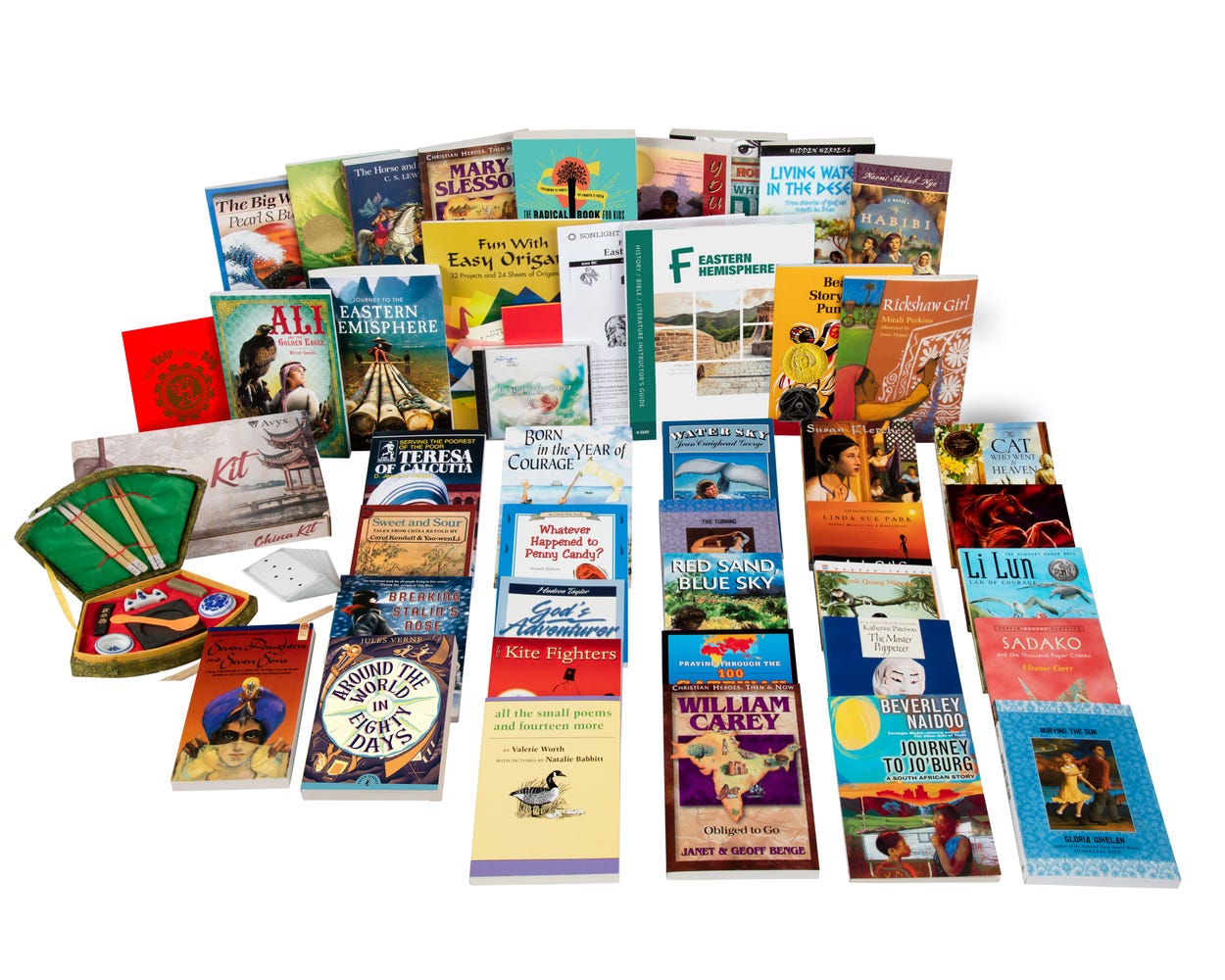 Unique in feel among all the Sonlight programs, Sonlight F studies non-Western cultures. Rather than studying history chronologically, as we do in our American and World History programs, F is a cultural study that focuses on several less-studied countries, regions, and continents.

Unique in feel among all the Sonlight programs, Sonlight F studies non-Western cultures. Rather than studying history chronologically, as we do in our American and World History programs, F is a cultural study that focuses on several less-studied countries, regions, and continents.

When asked which program is their favorite, some Sonlight customers vote for almost every one of the Sonlight programs. But usually, Sonlight F gets more votes than the rest.

One of our passions is the "10/40 Window," the band on a map that extends between 10 and 40 degrees north of the equator and stretches from West Africa in the west to Japan in the east. Incredibly, about two-thirds of the world's population live in this small band. This area lacks access to the gospel (many governments are hostile to the story of Jesus); many of the people live in extreme poverty; many live without access to medical care and access to education.

Our hope is that, through your studies, you will know more about those other inhabitants of the globe, and grow in compassion for them.

F also includes guided exercises and activities to help make the reading meaningful. Make a timeline of Chinese history. Record three interesting things you learned in that day's reading. Research an endangered species and give a mini-report.

The History program adds powerful missionary biographies: Hudson Taylor in China, William Carey in India, Mary Slessor in Nigeria, and God at work in Iran. May these stories help us to inspire the people walking in darkness to see the great light.

Please, consider each of these Read-Alouds a gift.

(Some years back, Young Fu of the Upper Yangtze went out of print. Sonlight founder Sarita Holzmann's daughter remembered her mother exclaiming, "I just don't know what to do! There isn't another Young Fu!" Even today, more than two decades after that temporary setback, with all the thousands of books Sonlight has read and tens of thousands that we have reviewed, we can say with confidence: There isn't another Young Fu.)

Shadow Spinner is an interesting twist on the story of Shahrazad. What would it be like for her, 989 days after starting to tell the Sultan stories? How desperate would she be for any new story? That's the beginning. This is a favorite for many customers.

When Sarita Holzmann's children were little, her husband started reading Seven Daughters and Seven Sons. This is not a short book (it's scheduled for more than two weeks). But it so captivated Sarita's family that they finished in three sessions, reading on late into the night to find out what happens to Buran.

From an age-appropriate but still-intense introduction to Russia under Stalin (how could it be anything but intense?), to a true story set in Sudan; from the beautiful memoir of life in Vietnam before the war, to a gorgeously illustrated Chinese fairy tale, this is, as I said earlier, a collection of books, each of which is a gift.

The Readers, too, are gifts. Jules Verne's classic adventure yarn Around the World in 80 Days. A Saudi Arabian boy who trains a golden eagle to hunt. The story of an Arabian horse that became an ancestor of the modern Thoroughbred. A Palestinian girl in Jerusalem befriends a Jewish boy. Leningrad, besieged during WWII, slowly starves; how can they survive?

Not only that: The circle is mostly water, and includes Mongolia, the least populated country on earth.

Please choose an option in the drop-down to view What's Included Items.

Please choose an option in the drop-down to view Additional Items.

Sign up to receive homeschool advice, encouragement, and to be among the first know about our best discounts, sales and offers!