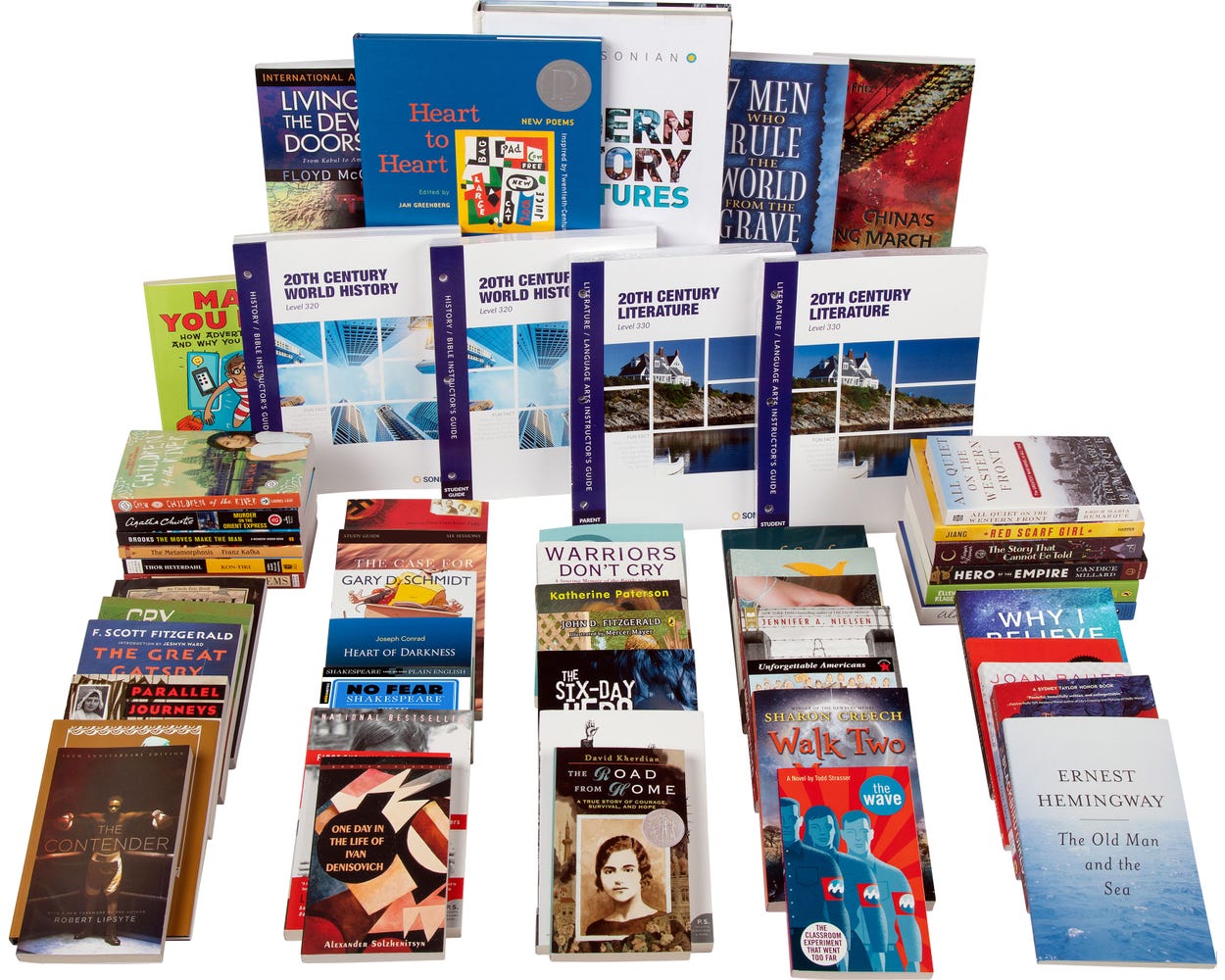 Like the other upper-level IG teaching tools, your 320 History and Bible Parent and Student Guides walk you through each school day, so students are free to embark on their own independent study. As they work through the Student Guide, you can easily engage and track their progress with tools that include your corresponding Parent Guide (with answers and extra notes), your students' journaling, and discussion.

Today's world was shaped – in national boundaries, in economic policy, in technological advances – by the 20th Century. Sonlight 320 takes a year to look at this transformative century.

In 1900, it took days to travel from Europe to America. In 2000, it took hours. In 1900, only a wealthy few owned a car. In 2000, cars were common, if not quite universal. In 1900, even the radio had barely been invented and broadcasts were still several years away. By 2000, the radio had come and gone as primary entertainment, replaced by the television at first, and then an increasing array of electronics: cable, video games, computers, and the internet. In 1900, the airplane had not yet been invented. By 2000, men had gone to the moon, and satellites in orbit allowed many advances in communication.

It was an astonishing century.

In earlier programs, we don't study this century in depth. These years brought incredible suffering. There are the familiar tragedies: trench warfare in WWI, the Holocaust, the atom bomb. And there are the less-familiar tragedies: genocides in Europe, Asia and Africa; mass starvation in China and the USSR; drug wars, child labor, and human trafficking.

So it isn't as enjoyable to study this century. But it is important. And in 320, we tried to balance the horrors that occurred, with the hope of the Gospel. We include four missionary biographies (compared to the more typical one or two), because in the midst of darkness, it's good to remember that God is still at work.

Yes, the Nazi concentration camps were horrible. But God was at work even there, caring for his children in miraculous ways.

The spine, Modern History in Pictures, is a visual guide that offers insight into the century and explores earth-shattering events that have shaped our modern world.

There are two classic works of fiction: All Quiet on the Western Front, set in the trenches of World War I; and One Day in the Life of Ivan Denisovich, set in a Stalin prison camp in Siberia.

One book covers the establishment of Israel after World War II. One covers the unsettled experience of being a refugee.

One is about the 6000-mile trek that Mao made before he came to power. Imagine: the equivalent of fleeing across the United States and back. To write this book, the author traveled to China and interviewed survivors, 50 years later. The author's trip was 30 years ago now. An eyewitness account would no longer be possible. What a gift to be given.

This is a powerful course.

Why is 320 so important and different? Because it covers in-depth a century of human atrocities, genocide, horrible wars, achievements, accomplishments – a century that was supposed to be civilized. The other programs do not even come close to the in-depth study of the 20th Century. At all. And yes – there are dark and depressing books, books that make you sad and furious at the same time, and yet books that leave you with hope for the human race. I can't imagine skipping Sonlight 300. It was my daughter's absolute, 100% favorite course because she learned SO much about the truth of the century, and got a glimpse of where we're headed or could be headed. —Sarita Holzmann, Co-founder & president of Sonlight Curriculum

The Bible 310 program helps guide your older students on their way to adulthood.

Know What You Believe and Know Why You Believe are wonderful introductory texts on the Christian faith and apologetics. The compelling Mere Christianity has helped countless Christians answer those who have questions about faith. Though not as deep, How to Ruin Your Life by 40 is a highly practical wake-up call. Help kids see that the choices they make now have long-term implications for good or bad.

The Literature 330 course can be largely selftaught. Your children are able to chart their own course with help from the Literature and Language Arts Student Guide. The corresponding Parent Guide lets you jump in at any time to assess learning or engage in meaningful discussion.

Sarita Holzmann's daughter once described 330 Literature as "an embarrassment of riches." When she helped revise the program, she came away astonished by the power and beauty in this course. With 330, I'm challenged, I'm grieved, I'm amused, I'm enthralled – all by turns. That happens in the other Sonlight programs, too, but I think the emotion is more, and deeper, here.

The books follow a rough chronological progression. The school year begins with The Great Brain, a children's book set in the late 1800s. One of the chapters describes how the family got a flush toilet, the first in the town. The big struggle in this book is with an older brother who is selfish and greedy. By the end of the book, he reforms.

Contrast that with one of the last books assigned, Alas, Babylon. Although it was written in 1959, when the threat of nuclear annihilation loomed large, it reads like a modern dystopian survival thriller. Where does one go for water, when all the surrounding communities have been destroyed?

In less than 100 years, the world went from the wonder of flush toilets to the horror of nuclear annihilation.

So that's the big-picture progression.

Sonlight's 330 Lit has a range of genres: dystopian, sci fi, the Great American Novel (Gatsby), novella, lyric poetry, travel narrative (or, maybe, anthropology, or adventure), absurdism, murder mystery, thriller, memoir, Shakespearean comedy (okay, that isn't 20th Century, but it connects with another book, and … it's Shakespeare!), historical fiction, and novel. Because "literary" works can be dark or difficult, the schedule tries to break up the more intense works with enjoyable, thoughtful books.

Among the more challenging works, 330 includes Brave New World, the remarkably prescient book that foresaw a culture dedicated to entertainment and pleasure.

The Great Gatsby is a compulsively readable story set in the Roaring Twenties. (One teacher challenged her students to find a single sentence they could improve on in the book, and none could. Whatever you think of the lifestyle of characters, the prose itself is stunning.)

Heart of Darkness, set in the Belgian Congo, has one of the most robust vocabularies I've ever read, and a few famous lines: "the fascination of the abomination" and, for the dissolute man facing death: "The horror! The horror!" This is an incredible book even without knowing that this is an eyewitness account of actual atrocities that took place during the reign of King Leopold.

Kafka's Metamorphosis, about a man who wakes to find himself transformed into a giant cockroach, portrays the isolation many people felt in the modern age.

Among the less-challenging works, 330 includes one of my favorite Agatha Christie novels. The world's best-selling author, she sold over a billion copies of her mysteries, known for their surprise endings. (By contrast, the Harry Potter series has sold about 450 million.) Meet the Belgiam detective Hercule Poirot as he finds out whodunit.

Kon-Tiki is the story of a man who wondered if perhaps the Polynesian Islands were settled by people sailing west from South America, rather than east from Asia. He constructed a balsa raft, recruited some men to go with him, and set afloat. This is the story of their astonishing journey.

One of the most beautiful books ever written, Cry, the Beloved Country, takes place in South Africa. A minister goes to seek his son, who has fallen into trouble in the city. Somehow the language holds the rhythms of Africa, and the words are unimaginably beautiful. In one of my favorite scenes, the grieving minister has gone to seek consolation, and sits as a preacher reads Scripture to him and the congregation: "It was not only a voice of gold, but it was the voice of a man whose heart was golden, reading from a book of golden words. And the people were silent, and Kumalo was silent, for when are three such things found in one place together?"

Whether or not your children have a voice of gold, may they have hearts of gold, and may they love the Book of golden words.

Fully integrated with the Literature, this year's Language Arts builds on past years and continues to develop literary analysis, creative writing, research, and essay skills, with weekly writing assignments in a range of lengths and topics.

Prefer to build your own course of study?

Create a complete course of study by mixing and matching individual high school courses. Visit sonlight.com/high-school to get started.