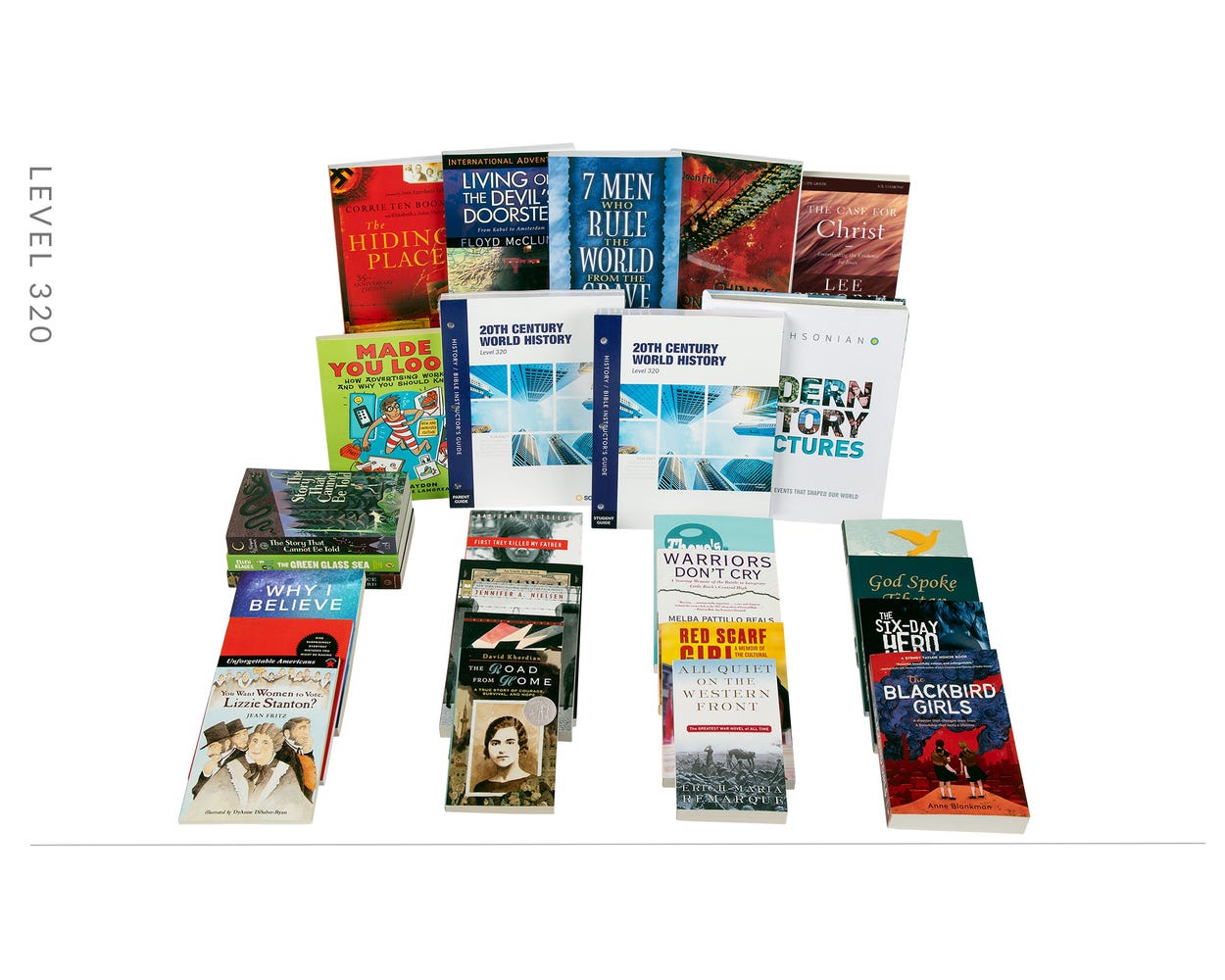 Like the other upper-level IG teaching tools, your 320 History and Bible Parent and Student Guides walk you through each school day, so students are free to embark on their own independent study. As they work through the Student Guide, you can easily engage and track their progress with tools that include your corresponding Parent Guide (with answers and extra notes), your students' journaling and discussion.

Today's world was shaped – in national boundaries, in economic policy, in technological advances – by the 20th Century. Sonlight 320 takes a year to look at this transformative century.

In 1900, it took days to travel from Europe to America. In 2000, it took hours. In 1900, only a wealthy few owned a car. In 2000, cars were common, if not quite universal. In 1900, even the radio had barely been invented and broadcasts were still several years away. By 2000, the radio had come and gone as primary entertainment, replaced by the television at first, and then an increasing array of electronics: cable, video games, computers, and the internet. In 1900, the airplane had not yet been invented. By 2000, men had gone to the moon, and satellites in orbit allowed many advances in communication.

It was an astonishing century.

In earlier programs, we don't study this century in depth. These years brought incredible suffering. There are the familiar tragedies: trench warfare in WWI, the Holocaust, the atom bomb. And there are the less-familiar tragedies: genocides in Europe, Asia and Africa; mass starvation in China and the USSR; drug wars, child labor, and human trafficking.

So it isn't as enjoyable to study this century. But it is important. And in 320, we tried to balance the horrors that occurred, with the hope of the Gospel. We include four missionary biographies (compared to the more typical one or two), because in the midst of darkness, it's good to remember that God is still at work.

Yes, the Nazi concentration camps were horrible. But God was at work even there, caring for his children in miraculous ways.

The spine, World History: Modern is a complete, extensive, and succinct guide to world history. It covers key events from before 1200 and up to present day. Each topic is organized in short, focused sections. Your student will explore key historical events, the forces leading up to the events, and the consequences and effects. The entire book can be used to study for the AP World History exam; however, we focus on the sections about the 20th Century.

The spine, Modern History in Pictures, is a visual guide that offers insight into the century and explores earth-shattering events that have shaped our modern world.

There are two classic works of fiction: All Quiet on the Western Front, set in the trenches of World War I; and One Day in the Life of Ivan Denisovich, set in a Stalin prison camp in Siberia.

One book covers the establishment of Israel after World War II. One covers the unsettled experience of being a refugee.

One is about the 6000-mile trek that Mao made before he came to power. Imagine: the equivalent of fleeing across the United States and back. To write this book, the author traveled to China and interviewed survivors, 50 years later. The author's trip was 30 years ago now. An eyewitness account would no longer be possible. What a gift to be given.

This is a powerful course.

Why is 320 so important and different? Because it covers in-depth a century of human atrocities, genocide, horrible wars, achievements, accomplishments – a century that was supposed to be civilized. The other programs do not even come close to the in-depth study of the 20th Century. At all. And yes – there are dark and depressing books, books that make you sad and furious at the same time, and yet books that leave you with hope for the human race. I can't imagine skipping Sonlight 300. It was my daughter's absolute, 100% favorite course because she learned SO much about the truth of the century, and got a glimpse of where we're headed or could be headed. —Sarita Holzmann, Co-founder & president of Sonlight Curriculum

The Bible 310 program helps guide your older students on their way to adulthood.

Know What You Believe and Know Why You Believe are wonderful introductory texts on the Christian faith and apologetics. The compelling Mere Christianity has helped countless Christians answer those who have questions about faith. Though not as deep, How to Ruin Your Life by 40 is a highly practical wake-up call. Help kids see that the choices they make now have long-term implications for good or bad.

Our high school courses are separated by subject to allow customers maximum flexibility. Feel free to buy either the History or the Literature, or both, or to mix-and-match with the History and Literature of other Sonlight courses.

Advanced Placement® is a trademark registered and/or owned by the College Board, which was not involved in the production of, and does not endorse, these products.

*AP and Advanced Placement are registered trademarks of the College Board, which was not involved in the production of, and does not endorse this product.