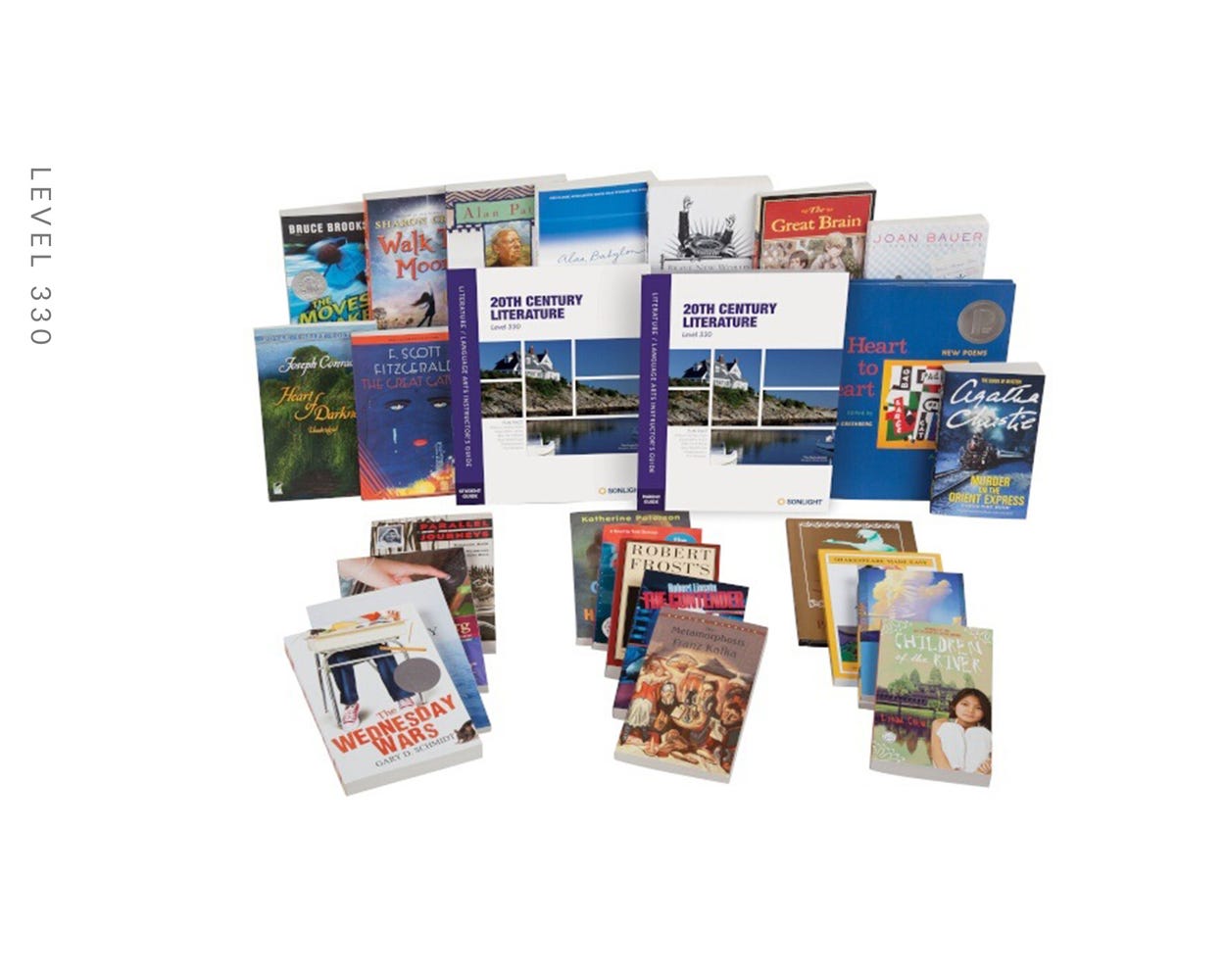 The Literature 330 course can be largely self-taught. Your children are able to chart their own course with help from the Literature and Language Arts Student Guide. The corresponding Parent Guide lets you jump in at any time to assess learning or engage in meaningful discussion.

My daughter once described 330 Literature as "an embarrassment of riches." She helped revise it some years back, and came away astonished by the power and beauty in this course. With 330, I'm challenged, I'm grieved, I'm amused, I'm enthralled – all by turns. That happens in the other Sonlight programs, too, but I think the emotion is more, and deeper, here.

The books follow a rough chronological progression. The school year begins with The Great Brain, a children's book set in the late 1800s. One of the chapters describes how the family got a flush toilet, the first in the town. The big struggle in this book is with an older brother who is selfish and greedy. By the end of the book, he reforms.

Contrast that with one of the last books assigned, Alas, Babylon. Although it was written in 1959, when the threat of nuclear annihilation loomed large, it reads like a modern dystopian survival thriller. Where does one go for water, when all the surrounding communities have been destroyed?

In less than 100 years, the world went from the wonder of flush toilets to the horror of nuclear annihilation.

So that's the big-picture progression.

Sonlight's 330 Lit has a range of genres: dystopian, sci fi, the Great American Novel (Gatsby), novella, lyric poetry, travel narrative (or, maybe, anthropology, or adventure), absurdism, murder mystery, thriller, memoir, Shakespearean comedy (okay, that isn't 20th Century, but it connects with another book, and … it's Shakespeare!), historical fiction, and novel. Because "literary" works can be dark or difficult, the schedule tries to break up the more intense works with enjoyable, thoughtful books.

Among the more challenging works, 330 includes Brave New World, the remarkably prescient book that foresaw a culture dedicated to entertainment and pleasure.

The Great Gatsby is a compulsively readable story set in the Roaring Twenties. (One teacher challenged her students to find a single sentence they could improve on in the book, and none could. Whatever you think of the lifestyle of characters, the prose itself is stunning.)

Heart of Darkness, set in the Belgian Congo, has one of the most robust vocabularies I've ever read, and a few famous lines: "the fascination of the abomination" and, for the dissolute man facing death: "The horror! The horror!" This is an incredible book even without knowing that this is an eyewitness account of actual atrocities that took place during the reign of King Leopold.

Kafka's Metamorphosis, about a man who wakes to find himself transformed into a giant cockroach, portrays the isolation many people felt in the modern age.

Among the less-challenging works, 330 includes one of my favorite Agatha Christie novels. The world's best-selling author, she sold over a billion copies of her mysteries, known for their surprise endings. (By contrast, the Harry Potter series has sold about 450 million.) Meet the Belgian detective Hercule Poirot as he finds out whodunit.

Kon-Tiki is the story of a man who wondered if perhaps the Polynesian Islands were settled by people sailing west from South America, rather than east from Asia. He constructed a balsa raft, recruited some men to go with him, and set afloat. This is the story of their astonishing journey.

One of the most beautiful books ever written, Cry, the Beloved Country, takes place in South Africa. A minister goes to seek his son, who has fallen into trouble in the city. Somehow the language holds the rhythms of Africa, and the words are unimaginably beautiful. In one of my favorite scenes, the grieving minister has gone to seek consolation, and sits as a preacher reads Scripture to him and the congregation: "It was not only a voice of gold, but it was the voice of a man whose heart was golden, reading from a book of golden words. And the people were silent, and Kumalo was silent, for when are three such things found in one place together?"

Whether or not your children have a voice of gold, may they have hearts of gold, and may they love the Book of golden words.

Fully integrated with the Literature, this year's Language Arts builds on past years and continues to develop literary analysis, creative writing, research, and essay skills, with weekly writing assignments in a range of lengths and topics.